Full Name
Colleen Chien
Job Title
Professor
Speaker Bio
Colleen Chien is a Professor at Santa Clara University School of Law where she teaches, mentors students, and conducts empirical research on innovation, intellectual property, and the criminal justice system. From 2013-2015 she endured a brutal commute to serve in the Obama White House as a Senior Advisor, Intellectual Property and Innovation, working on a broad range of patent, copyright, technology transfer, open innovation, and other issues.The privilege of public service was worth it. Professor Chien is nationally known for her research and publications on domestic and international patent law and policy issues. She has testified on multiple occasions before Congress, the DOJ, the FTC, and the US Patent and Trademark Office on patent issues, frequently lectures at national law conferences, and has published several in-depth empirical studies, including of patent litigation, patent-assertion entities (PAEs) (a term that she coined), the secondary market for patents, and, in the criminal justice realm, the second chance gap between those eligible for and receiving second chances (through early release, records clearing and re-infranchisement).
Professor Chien’s work has been featured in the Wall Street Journal, New York Times, NPR’s Marketplace, and numerous other venues and she is among the top 20-cited intellectual property and cyberlaw scholars in the US. Prior to entering academia, Professor Chien did stints as an investigative journalist, strategy consultant, and practicing lawyer (as an associate, then special counsel at Fenwick & West LLP in San Francisco). In 2017, Professor Chien was awarded the American Law Institute’s Early Career Medal; she also has received the Intellectual Property Vanguard Award, and has been named Eric Yamamoto Emerging Scholar, a Tech Law Leader, one of Silicon Valley’s “Women of Influence,” and one of the 50 Most Influential People in Intellectual Property in the world. She is the founder of several civic engagement projects, a Fellow of the Stanford Computational Policy Lab, Faculty Scholar of the Markkula Center for Ethics, and an advisor to ClearAccessIP, an AI-driven patent analytics and enterprise software firm. Chien graduated from Stanford (Engineering) and Berkeley Law Schools and is a proud Oakland resident along with her husband and their two sons


We also require all our speakers to review and agree to our speaker terms, license and waiver (attached) so that we can publish your bio and headshot and use any digital images from our event and/or your session recording for future event marketing. The agreement terms are straightforward and standard practice for events, so I don't believe you should have any concerns.
Speaking At
Two Pandemics 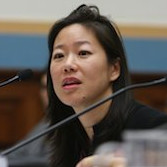