Full Name
Nina Totenberg
Title
Legal Affairs Correspondent
Organization
National Public Radio
Speaker Bio
As a child, Ms. Totenberg was an avid reader and her female role model was Nancy Drew. In fact, the fictional female detective inspired her decision to become a journalist. She was drawn to the character’s fearlessness. “Nancy was fearless. I was anything but fearless, but Nancy’s successes gave me hope that in a world where men had all the fun jobs and the good jobs, I too would one day get one of those jobs.”

Ms. Totenberg enrolled in Boston University in 1962, majoring in journalism, but dropped out less than three years later because she was “bored with being a student and itching to be a reporter.”

Soon after, Ms. Totenberg began her journalism career at the Boston Record American, where she worked on the Women’s Page and learned breaking news journalism skills by volunteering for night duty as a “legman” covering everything from crime to school board meetings.

Those stories were what she wanted to do, not the stories on the Women’s page, which featured fashion and wedding stories, “but not like we read in the newspapers today,” she says. The fashion stories “were largely rewrites of press releases and the wedding stories were rewrites of what people sent in about the seeded pearl gowns and things like that.”

Ms. Totenberg began her foray into journalism at a time when women were required to overcome a massive cultural hurdle.

“People just told you they didn’t hire women or, ‘We don’t hire women for the night shift,’ which was a classic way to get a first job,” she remembers. “The Civil Rights Act was in place, but it was pretty young then, and most employers really didn’t think that they had to abide by it for women. So it was very hard to get the first job.”

Being the only woman in the newsroom was a challenge. “I learned to be a pretty tough broad if I wanted to get ahead,” she says.

Ms. Totenberg later moved to Washington, D.C. and landed a position with Roll Call, then a small Capitol Hill newspaper. Following her stint there, she moved on to the National Observer, a weekly newspaper published by Dow Jones, which at the time also owned the Wall Street Journal. . She filled a number of roles, including working in the print shop to supervise newspaper publication and covering Capitol Hill.

It was at the Observer that Ms. Totenberg began covering the Supreme Court of the United States. “I started trying to write things, not just about what had to be covered if it was major, but how the court worked, who the justices were and what these cases were all about,” Ms. Totenberg has said.

She learned about the judicial system as she went along. “I just was fearless in asking questions,” Ms. Totenberg says. “If I didn’t understand something, I would just ask whoever might know the answer.”

In 1975, she landed at NPR and has been there for 40 years. In her early years with NPR, Ms. Totenberg covered the Supreme Court, the Justice Department, the House and Senate Judiciary committees, all special prosecutors and scandals, and the intelligence community, in addition to some politics.

But increasingly, the legal world, and the Supreme Court, would become her focus. In 1991, Ms. Totenberg reported on a story that would change the future of sexual harassment claims in the workplace. Her ground-breaking report about University of Oklahoma Law Professor Anita Hill’s allegations of sexual harassment by Judge Clarence Thomas led the Senate Judiciary Committee to re-open Thomas’s Supreme Court confirmation hearings to consider Hill’s charges.

Ms. Totenberg’s reporting led to NPR receiving the prestigious George Foster Peabody Award for its gavel-to-gavel coverage — of both the original hearings and the inquiry into Anita Hill’s allegations, and for Ms. Totenberg’s reports and exclusive interview with Ms. Hill.

Ms. Totenberg’s coverage of the Supreme Court and legal affairs has won her widespread recognition and several awards, including the Long Island University George Polk Award for excellence in journalism; the Sigma Delta Chi Award from the Society of Professional Journalists for investigative reporting; the Carr Van Anda Award from the Scripps School of Journalism; the prestigious Joan S. Barone Award for excellence in Washington-based national affairs/public policy reporting, which also acknowledged her coverage of Justice Thurgood Marshall’s retirement.

Ms. Totenberg was named Broadcaster of the Year and honored with the 1998 Sol Taishoff Award for Excellence in Broadcasting from the National Press Foundation. She is the first radio journalist to receive the award.

She is also the recipient of the American Judicature Society’s first-ever award honoring a career body of work in the field of journalism and the law. In 1988, Ms. Totenberg won the Alfred I. duPont-Columbia University Silver Baton for her coverage of Supreme Court nominations. The jurors of the award stated, “Ms. Totenberg broke the story of Judge (Douglas) Ginsburg’s use of marijuana, raising issues of changing social values and credibility with careful perspective under deadline pressure.”

Ms. Totenberg has been honored seven times by the American Bar Association for continued excellence in legal reporting and has received more than two dozen honorary degrees. On a lighter note, Esquire magazine twice named her one of the “Women We Love.”

Ms. Totenberg frequently contributes to TV shows, and she has also written for major newspapers and periodicals — among them, The New York Times Magazine, The Harvard Law Review, The Christian Science Monitor, and New York Magazine. She is also featured in a new book entitled, “Susan, Linda, Nina, & Cokie: The Extraordinary Story of the Founding Mothers of NPR.”

Ms. Totenberg is often featured in Supreme Court documentaries, most recently in “RBG.” As Newsweek put it, “The mainstays of NPR are Morning Edition and All Things Considered. But the créme del la créme is Nina Totenberg.”
Speaking At
2021 ChIPs Global Summit Welcome & Hall of Fame Awards Ceremony 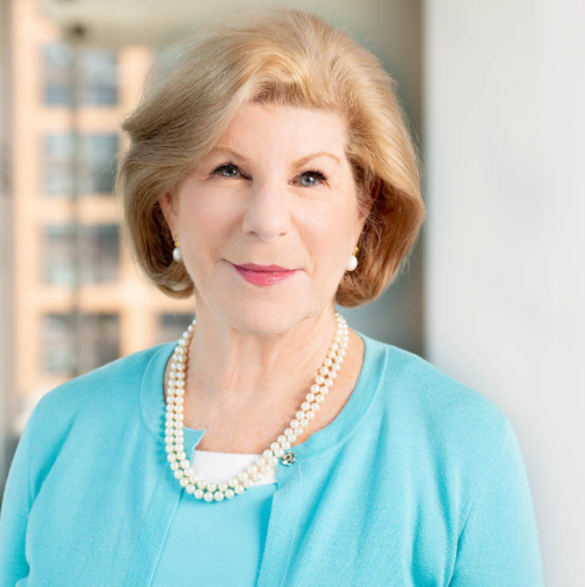